Humpback whales (Megaptera novaeangliae) are easy to identify and are well known for their spectacular breaching, large flippers and for beautiful, complex mating songs. 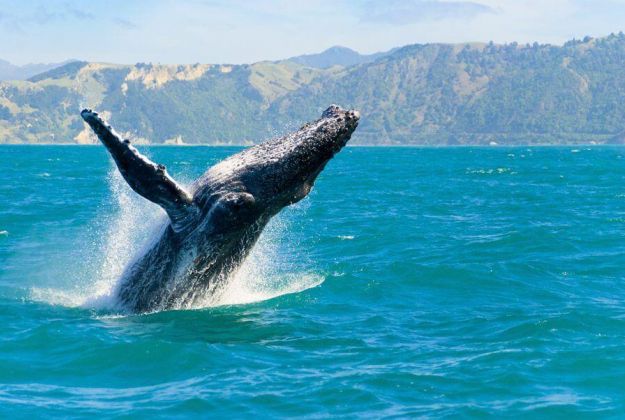 They are frequently seen passing by Kaikoura's coastline during winter months of June, July and August, where they sometimes perform spectacular displays of acrobatics, breaching, lobtailing and flipper slapping.

Humpback whales hunt and feed during the summer months in the colder waters like Antarctica and then migrate to warmer tropical waters during the winter months for mating heading towards Australia and Tonga.

Whales frequently breach, throwing two thirds of more of their bodies out of the water and splashing down on their backs.

The humpback has a distinctive body shape, with long pectoral fins and a knobbly head. They have a small dorsal fin with a distinctive hump at the front, knobbly protuberances on the head, tip of lower jaw and leading edge of extremely long flippers. Their tail flukes are broad and have a unique black and white colour pattern, which allow individuals to be identified.

They have a variable colour but are generally black with white on the underside and on the flippers.

Males produce a complex song lasting 10 to 20 minutes, which they repeat for hours at a time. Its purpose is not clear, though it may have a role in mating. These sounds can be heard many miles away and are heard as a combination of moans, howls and cries among other noises which can go on for hours.

Their diet is made up of krill and small schooling fish (e.g. mackerel and herring). They are baleen whales, meaning they are filter feeders.

Like other large whales, the humpback was a target for the whaling industry. Once hunted to the brink of extinction the population fell by an estimated 90% before a 1966 moratorium, most populations now appear to be recovering.

These whales are known for entanglement in fishing gear, cray pots lines and sometimes have collisions with ships.