Australasian Gannets are beautiful big seabirds, snowy white, with a golden head, and tipped wings that reach 2 metres across. 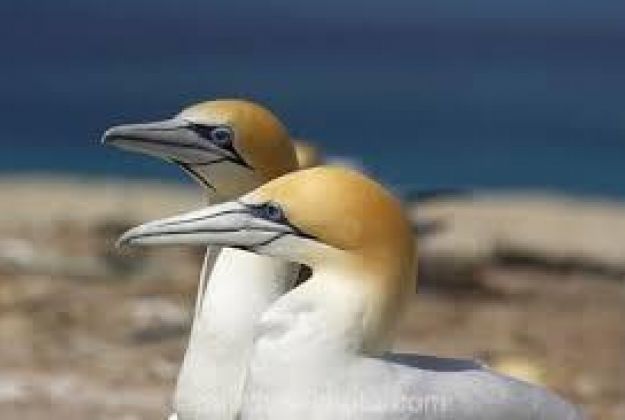 Gannets are expect fishers with remarkable plunge-diving techniques that enables them to hunt between air and the water.

The Australasian gannet (Morus serrator), also known as Australian gannet and tākapu, belongs to the booby and gannet family, Sulidae. They are a conspicuous predominantly white seabird with black flight feathers at the wingtips and lining the trailing edge of the wing. The central tail feathers are also black.

Australasian Gannets are seabirds and are a familiar sight off the coast and are found throughout the southern and south-eastern Australia, to New Zealand. They can be observed feeding solitarily or in large congregations, especially near the larger colonies.

The average lifespan of a gannet is between 25 to 40 years and they are believed to be one of the longest-lived seabirds.

Breeding season is from October-November, Gannet pairs may remain together over several seasons. They perform elaborate greeting rituals at the nest, stretching their bills and necks skywards and gently tapping bills together. A single egg is laid between mid-September to mid-December. The egg is incubated by both parents and both adults are kept busy feeding the chick. The adults mainly stay close to colonies, whilst the younger birds disperse.

The closest breeding colony to Kaikoura is at Farewell Spit, where unusually the bird’s nest on shell banks at sea level.

New Zealand holds the bulk of the Australasian gannet breeding population, with about 13% of the population breeding in Australia. The New Zealand population was about 46,000 pairs in 1980-81 and continued to increase at about 2% per annum, although some former breeding sites have been abandoned. Their population is probably regulated by the availability of suitable prey within easy flying distance of breeding colonies. Southern black-backed gulls take some eggs and young nestlings.

Birds soar 10 m or more above the surface of the water, herding fish into dense shoals, then fold their wings back and dive into the water to catch their prey. The fish are grasped with the aid of small backward-pointing serrations along the edges of the bill. A bird only stays under the water for about ten seconds, but the fish is normally swallowed before the bird reaches the surface.