The world's smallest penguin, little penguin (also known as little blue) stand just over 25 cm and weigh around 1 kg. They spend much of their time at sea hunting small fish, crustaceans and squid. 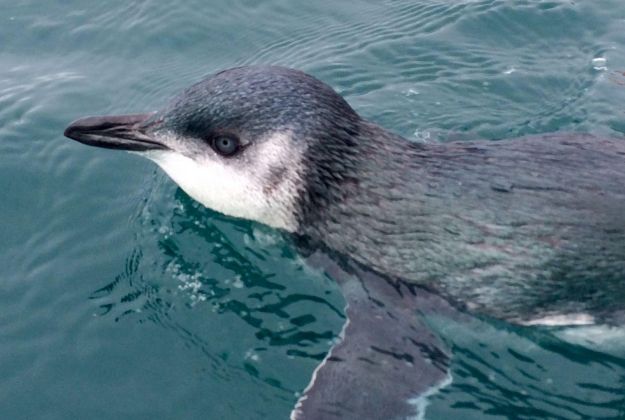 The world's smallest penguin, little penguin (also known as little blue) stand just over 25 cm and weigh around 1 kg. They spend much of their time at sea hunting small fish, crustaceans and squid.

Their plumage is slate-blue with a bright white belly. They are found around most of New Zealand's coastline and in southern Australia.

Like all penguins they cannot fly, but their paddle-like flippers are excellent for flying through the water.

Blue penguins forage for food up to 25 km offshore and 70 km from the colony. They can reach speeds of up to 6 kph underwater.

Little Blues only come ashore under the cover of darkness and live underground in burrows, natural holes, or under human structures or buildings.

The population and range of the blue penguin has been declining in areas not protected from predators. Where predator control is in place, populations are stable or increasing.

Why and when they come ashore

Adult birds come ashore between May and June to prepare nests. This small bird may waddle up to 1.5 km from the sea, and climb 300 metres to find the perfect nest site.

Traditional nests are in underground burrows, under vegetation, in crevices, between rocks or in caves. Since people came onto the coastal scene, little blue penguins have also taken to nesting under houses and boat sheds, in stormwater pipes, and stacks of timber.

Usually two eggs are laid from August to November. Young chicks are generally not left alone until three weeks old, and then both parents are kept busy bringing in food. After about eight weeks the chicks are ready to fledge and fend for themselves

Independent once again, parents stock up on food before coming ashore to shed their feathers and grow a new waterproof coat.

The moult lasts about two weeks and can happen any time between November and March. The penguins are especially vulnerable at this time as they cannot swim.

Kaikoura's Penguin Education and Awareness Program (PEAP) aims to give locals and visitors a peap into the lives of the little penguins living in Kaikoura.  The PEAPs are offered during the day for local school groups and in evenings for visitor groups.  They include a slideshow presentation about penguins generally, and little penguins specifically, in the Coastguard building in South Bay.  The group is then invited into the special penguin viewing area below the Coastguard building.  Depending on the timing of your visit, you may see penguins coming in for the night, penguins that are moulting or penguin nesting boxes with eggs or chicks.  The PEAP is a team effort between Kaikoura Coastguard and KORI and is possible thanks to the long-term monitoring of the population started by Lindsay Rowe.

Kaikoura Kayaks is proud to support K.O.R.I (The Kaikoura Ocean Research Institute), by sponsoring two penguin's Rainbow and Kikorangi (named by our daughter and staff).